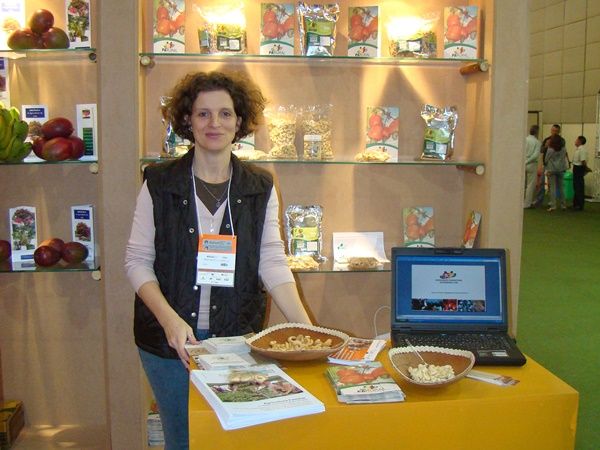 by: Malchus Kern from the Online Shop Bio-Vegan-Bestellen

I’m talking to Angela Küster, co-founder of PlanetVegFoods  a company that recently started importing vegan cashews from Brazil in preparation for biocyclic organic certification. The cashew nuts can be bought in the online shop at Bio-Vegan-Bestellen and we have made it our mission to give as much insight as possible into the production of the food we sell and would therefore like to introduce the people behind the products.

Ms Küster, you are the founder of PlanetVegFoods – please introduce yourself briefly and tell us what led you to found the company?

I have a PhD in political science, was born in Stuttgart and live with my family in Berlin. I spent a total of 20 years abroad, 15 years in Brazil and 5 years in Spain, working on various projects and studies, mainly on food and agriculture.

I have long toyed with the idea of founding a food start-up myself because I am particularly fascinated by the development of products for vegan nutrition. For many years, I have been eating mainly organically grown food and I have been living vegan for seven years. Then I read “Brains versus Capital” by Günther Faltin and decided to found PlanetVegFoods to work with fair trade and vegan organic products.

You lived in Brazil for 15 years? What did you do there professionally? What made you decide to return to Germany?

For the first four years I had a scholarship from the Heinrich Böll Foundation and did research on sustainable development and democracy and a PhD at the FU-Berlin. After that, I started coordinating projects as a research assistant in the office of a German foundation in Fortaleza.

This resulted in a project on the sustainable development of family farming, which was funded by KAS and the EU for five years and led by me. The project ended at the beginning of 2011 and the foundation closed the office. After that, we still organised a big agroecology congress. In 2012, I then went to Spain with my husband and youngest daughter, and in 2017 we came back to Berlin, as I wanted to be closer to my family again.

You are a political scientist. How did you get into the sustainable cultivation of cashews – where does your love of the super kernel come from?

My love is not specifically for the kernel, but for the whole cashew and the culture around it. The cashew culture is widespread in the northeast of Brazil and is an important source of income for smallholder families. As part of our project, I and my husband also worked with cashew farmers and their cooperatives on improving quality, participating in fairs and certification. At the same time, the families learned to plant a garden and grow more vegetables and fruit so that they do not depend only on the sale of cashews. 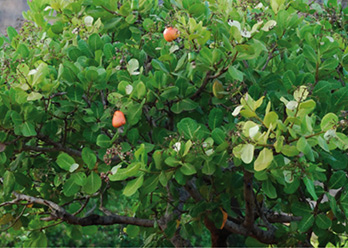 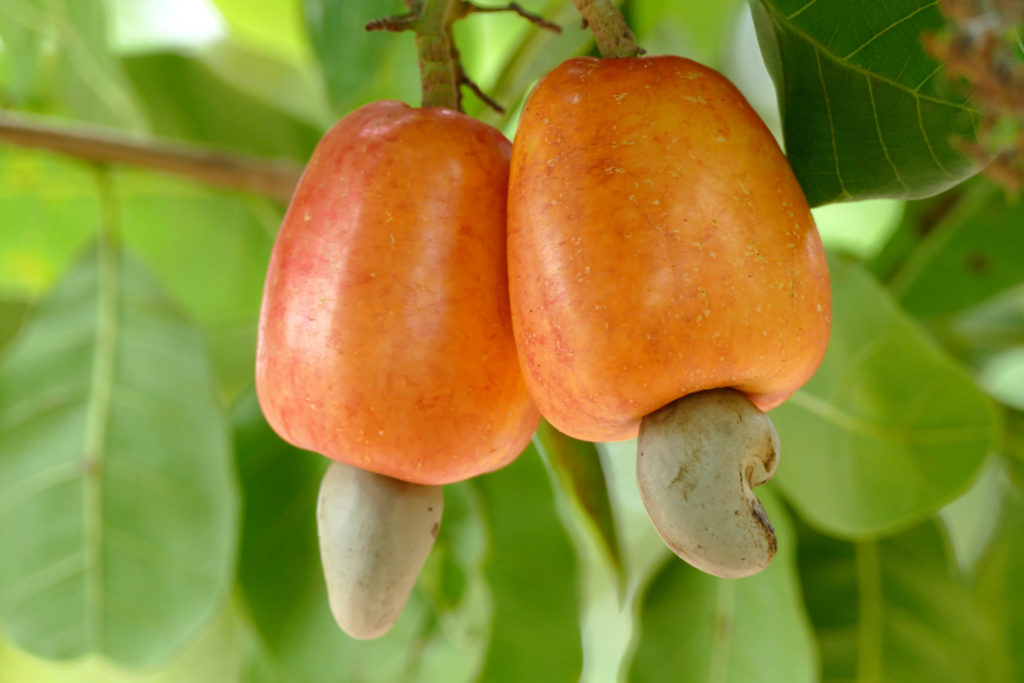 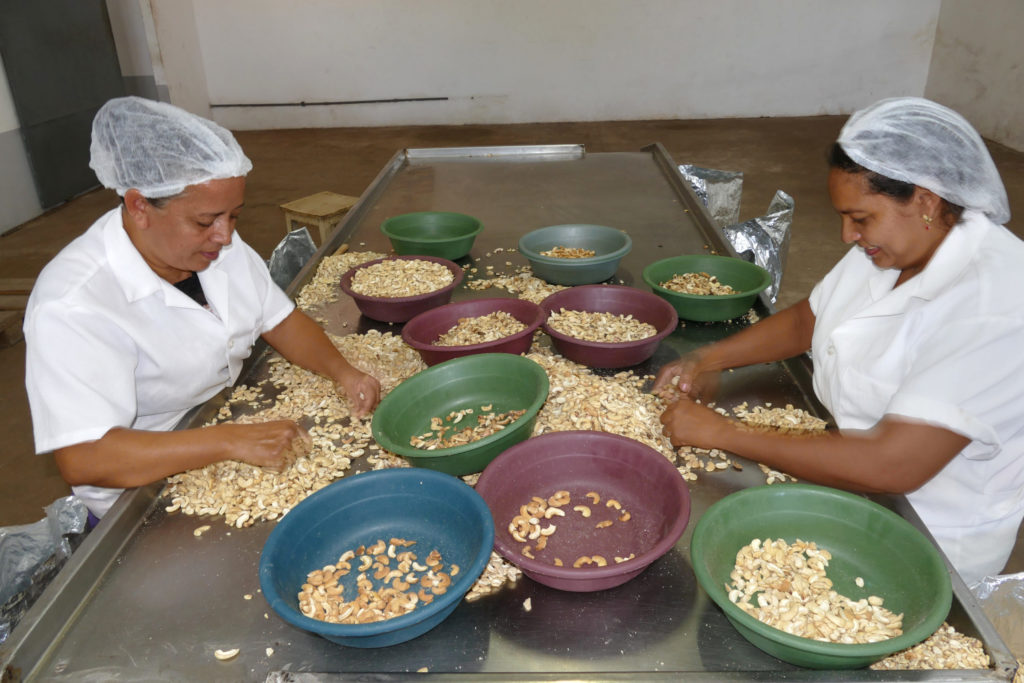 What particularly fascinates you about cashews?

The cashew culture itself fascinates me. The cashew trees were already used by the indigenous peoples in north-eastern Brazil. Their leaves were said to have healing powers for the kidneys and because the core resembles a kidney, the tree was called “acajú”, “kidney tree”. The Portuguese spread the tree to Africa and Asia, where it was used to fortify coasts. In the Northeast, the cashew is still part of the culture, there are “cashew festivals”, with the diverse products made from cashew, folklore and information about cashew cultivation. I also found it fascinating to try the many dishes that are possible with the cashew pulp. Cashews can also be used in many different ways.

What secrets lie dormant kernel of the cashew nut that many here in Germany do not know?

The seeds are full of vital nutrients and are a wonderful source of protein with their high quality protein. They are also rich in monounsaturated and polyunsaturated fats, which lower bad cholesterol and raise good cholesterol.

In fact, it is almost a secret that cashews are among the best sources of L-tryptophan. This is an amino acid from which the messenger substance serotonin is produced in the body, which is also colloquially called the happiness hormone. It has an antidepressant, mood-lifting, relaxing and sleep-promoting effect. They are therefore considered good-mood nuts. And they also contain B vitamins, which are considered to strengthen the nerves and increase concentration. Cashews really have what it takes.

Why is it particularly important to you that your cashews come from smallholder and cooperative producers? What is special about the cultivation of cashews in this cooperative?

Through our project work, we saw how difficult it is for the producers to bring their products to the market. They depend on middlemen who buy the cashews from them at a low price even before the harvest. This is also true for other products and we worked with some cooperatives at that time to enable them to market themselves and get higher prices. A few cooperatives managed to export when they worked directly with importers from Europe or the USA.

We worked particularly intensively in the municipality of Barreira, together with a local association. Many cashew farmers took part in the courses and events and soon we dedicated ourselves to strengthening the organisation, the qualification of the products and their certification.

It is important to us that as much added value as possible is created locally by processing and packaging the products there. We work directly with cooperatives and family farms to develop new products and improve working conditions. The “cashew-campaign acajú” is a project in which PlanetVegFoods invests. In the future, a part of the profits will flow into the project to strengthen agroforestry and increase the income of the families.

PA-Rural was founded as a community association of Barreira (ACB – Associação Comunitária de Barreira) in 1986. The cashew harvest of around two thousand families is processed in the factory, and there are also around 50 mini-factories where the cashews are steamed, cracked and sorted. However, most of the sales are made through intermediaries of the larger factories, or through the PA-Rural.

PA-Rural processes the cashews traditionally, which means that the smallholders wait for the cashews to ripen. The cashews are then dried in the sun and gently steamed to crack the hard shell. Steaming releases the toxins from the shell, but unlike burning, as is often done in Asia, no toxic fumes are produced. The cashews that are removed are cleaned of any remaining shell and sorted according to size and quality. The PA-Rural cooperative guarantees good working conditions, child labour is not permitted and attention is paid to the health of the workers.

How did you get into biocyclic vegan farming?

I was the chairperson of the V-Party for the Berlin State in 2018 when I met Axel Anders. I had already previously become very interested in the idea of biocyclic vegan agriculture during a lecture by Johannes Eisenbach at the GLS Bank. Mr. Anders invited me to meetings and I worked a while with the Fundraising team of the German Biocyclic Vegan Association “Förderkreis”, but did not have much time to apply. Now I am part of the work group “Trade and Distribution”, the exchange there is very important. We are currently in the process of making it possible for PA-Rural to obtain biocyclic vegan certification together with organic certification. 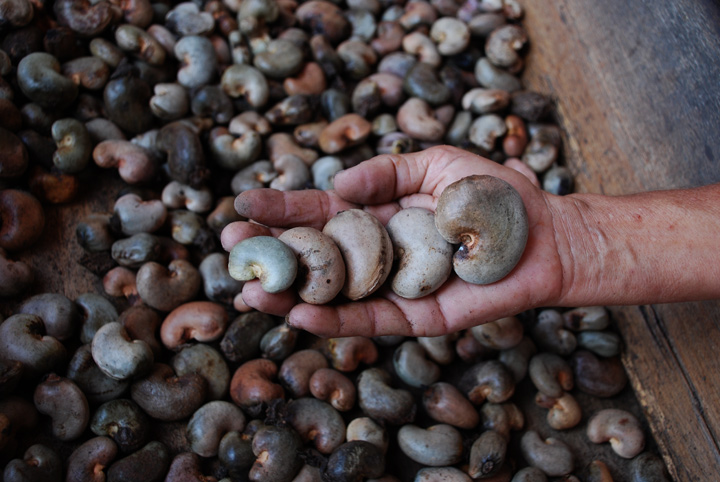 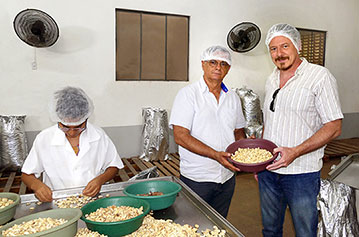 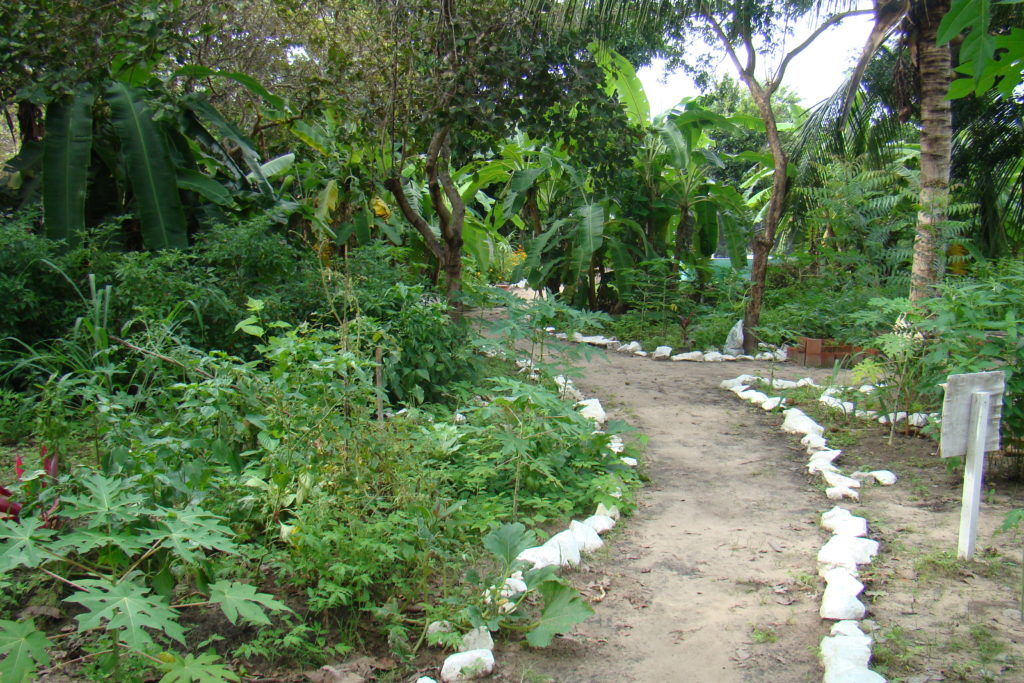 A large part of the cashew fruit is not recycled but disposed of – do you want to change that? How?

The fruit is quickly perishable and usually remains on the compost heap or is discarded. Only a small part is processed into cashew juice, the traditional cajuína, and an even smaller part into dried fruit and jam. Even in the production of cajuína, the fibres that remain are those that can be recycled.

My husband is an agronomist, together we had the idea of bringing cashew “meat”, the fruit pulp fibres, to Germany, which we had already experimented with at the time. The cashew fibres are very versatile and can be used in vegan cuisine. So far, they are delivered frozen to local restaurants by a company we are working with on the development. In order to process them into canned food, we still need to invest quite a bit. Since it still takes time to make the processing suitable for export, we started with cashews, and now we are adding cashew juice.

How can you imagine the taste of cashew juice, is there anything comparable?

Cajuína is a typical drink from the northeast of Brazil, without alcohol, clarified and sterilised. The functional drink has a yellowish amber colour due to the caramelisation of the natural sugar in the juice. The cashew juice we import is filtered through an ultrafiltration membrane without the use of animal protein, so it is vegan. It is certified organic and has no added sugar or additives. Cajuína contains four times more vitamin C than oranges, is drunk chilled and can be used for mixed drinks.

Which part of the cashew fruit do you personally like best?

I love the cashews, but I also like the juice, cajuína and fruit fibres. Actually, I can’t say which one I like best, they are very different products.

What distinguishes broken cashews from the raw kernel?

The breakage occurs during the processing of the cashew kernels. They should be removed from the shell as completely as possible, but they often break. This breakage is then sold at a lower price and can be used well for cakes, sauces or to make cheese.

In the supermarket you only get roasted kernels, your cashews are sold raw – why?

First of all, roasted kernels do not keep as long, and they are usually salted. Raw cashews can be used in a variety of ways, and they taste best freshly roasted in a pan or in the oven. They can be used to enrich Asian dishes or salads, or in muesli, as they are not salted.

What are other special features of the cashews that you import from Brazil?

Unlike the Asian cashews, the ones from Brazil are larger and don’t contain as much tannin/tannins, which often leave a somewhat bitter aftertaste. They are simply the original cashews from the country of origin, they simply taste better.

What should all people know about cashews?

Cashews are super healthy and despite the distance they travel to Europe, their versatile use in vegan cuisine is a good contribution to reducing the consumption of animal products. The journey from Brazil is also not as long as the distance cashews travel from Asia, which are often first shipped there from Africa for processing.

It would be good to inform more about the conditions under which cashews are grown and processed. Everyone should know why good quality, organically grown and fairly traded, costs more and why it should be worth it to us. In the case of Acajú cashews, the purchase strengthens the cashew culture in Barreira, Ceará, Brazil. If you want to know more about our project, please subscribe to our newsletter.

Ms Küster, thank you very much for your time and the detailed interview.